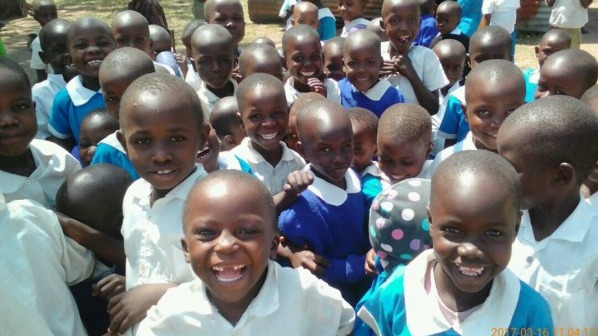 What began as an idea among friends in Chippenham has now brought safe water to 100,000 people in Africa. The first step on a journey that would lead to wells being built at 100 schools in Kenya began with leadership developer Nigel Linacre and his colleague Jefferson Cann. To challenge executives, he would take them to a rural school in Kenya and ask them ‘to make a difference’. On this occasion eight years ago, the executives included engineers Colin Brown and Graeme Vousden who quickly identified the one thing that would make the biggest difference to Summit Schools in Maragua, Kenya: water. All that was needed was a borehole to replace the old shallow well.

Nigel said: “Identifying water as the number one thing that could improve not just the lives of children but their families felt like a light bulb moment for us. It’s such a simple idea, dig a hole, draw water, and make a change. We had to do it.”

Returning to the UK, Nigel was driven to raise the money to make this happen. Friends contributed cash and time to fundraising. All that was needed was a name for this new charity. Nigel’s son coined the term ‘WellBoring’. The borehole was drilled, the well installed, and several hundred school children had reliable access to safe water. Within 18 months, a huge greenhouse sprung up to grow ‘luxury’ foods like tomatoes and a small lake for fish was added.

“Sensations of relief and pride washed over us when we saw the well working and being used. We all thought ‘let’s keep doing this’,” Nigel added.

Naturally, more wells followed. And within seven years WellBoring had given wells to 60 schools. Thanks to closer working with Kenyan social enterprise GroundWater, investment in drilling technology, a boom in fundraising and donations from the Rotary Club, and a partnership with Colgate-Palmolive, last year saw 40 wells completed. With each one supplying water to around 1,000 people, WellBoring has now improved around 100,000 lives.

Nigel said: “Safe water is the biggest game-changer. We are excited to be one of Britain’s fastest-growing water charities. It’s taken us eight years to get to 100 schools, and now we plan to get to 200 schools by late next year, expanding into Uganda as well as Kenya, and kick on from there.”

Back to news articles

Did you enjoy this article? Share it with friends and family to spread the word.